Do you have videos already published to a Fall term YuJa course channel in Canvas that you want to make available to a Winter term Canvas course?

Have questions? Need further assistance? Contact the ITS Information Desk at 540.458.4357 (HELP) or email help@wlu.edu.

This past Fall, the The Integrative and Quantitative (IQ) Center collaborated with the Dance department on two interesting projects.

Since the fall recital, W&L Dancers Create, was going virtual, DANC 110 (University Dance) wanted to create a video to be used in the program. The class created an original music score and choreographed a dance that utilized outdoor spaces around campus.

They worked with the IQ Center to shoot and edit the dance using equipment from the Center, including video cameras and a drone. The entire piece was shot and edited in 4K resolution and the 5 minute final version was included as part of the Fall program:

This system allows dancers wearing a special suit covered with reflective markers to capture the full range of their motion to a computer system. This is the same technique used in movies and video games to capture realistic movements that can be transferred to computer generated characters.

The IQ Center motion capture system was set up in the dance studio and projected on the wall, so the dancers could see the capture data in real time. The recorded output was then applied to computer generated characters and rendered as video clips.

Here the four dancers in the class were inserted on a computer generated stage together performing a similar dance routine:

Please log out of your academic.wlu.edu WordPress site by 7 am EST on Tuesday, December 15.

Sites will be accessible (if your site is public-facing), but no edits will be allowed between 7 am EST and 5 pm EST while required maintenance takes place. Thank you for your compliance – this will ensure no data is lost.

Sorry for the inconvenience. Please email hmacdermott@wlu.edu if you have questions.

Sadly, there is an on-going issue with Safari 13.1 and later versions with displaying images and downloading files. Canvas engineers are currently working on a solution for this issue.

Until Canvas releases a fix, you may avoid errors by disabling cross-site tracking prevention in Safari when using Canvas:

If disabling cross-site tracking doesn’t resolve the issue, please try the latest version of Chrome or Firefox. (Stinks, we know.)

Need assistance with Safari or Canvas? Contact the ITS Information Desk at 540.458.4357 (HELP) or email help@wlu.edu.

Need to copy course content in Canvas such as Assignments, Discussions, Quizzes, Files, Modules, and/or Pages from a sandbox course or an official Fall term course into the official Winter Term course shell that ITS has created for you?  Here’s how! 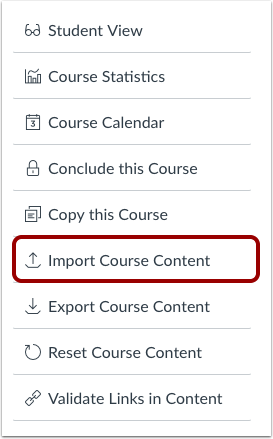 In the Content Type drop-down menu, select the Copy a Canvas Course option.

Search for a Course

To search for a course by name, enter the name in the Course Name field [3]. Click the name of the course when it appears.

Note: If you have access to more than 100 courses, the search page only displays the Course Name field.

Note: If you select the specific content option, you are required to select the content you want to import after you review the remaining page options. After you start importing the content, the import selection cannot be canceled.

Adjust Events and Due Dates

If you want to adjust the due dates associated with the course events and assignments, click the Adjust events and due dates checkbox.

The Current Jobs section displays the status of your import. Running reports display a progress bar indicating the time remaining to complete the import [1].

If you chose to select specific content in your course, the current job will show as Waiting for Select [2], which means you must select the content you want to import.  *** THIS IS OFTEN WHERE FOLKS GET CONFUSED BECAUSE THEY’VE NOT YET SELECTED WHAT TO IMPORT SO NOTHING HAPPENS ***

The import may also display other status indicators as part of the import process. Learn more about course import statuses.

View the content from any completed imports by accessing any link in Course Navigation.

folks who teach: what pandemic-induced adjustments to your teaching do you plan to continue implementing once the world is back to normal?

Thematically, it sounds as if instructors are embracing:

This thread is pure gold. Many thanks to Professor Dennie for asking this great question!

BONUS: W&L Peeps You Should be Following on Twitter (If we’ve missed someone, please let us know!)

Many, many, many thanks to the wonderful W&L students Julia H., Troy L, Natasha G., Nicky D., and Emma W. who were willing to share their experiences and opinions. We are all deeply grateful for your willingness to tell us honestly how your classes have gone.

To all W&L students, please know that faculty and staff SEE you and we HEAR you. We CARE about you as people, not just students, and we are HERE for you. We WILL get through this together. ❤️

Taking time to connect with each student not only helps maintain relationships but also allows us an opportunity to gather important data to inform our assessment. It gives US feedback on the effectiveness of what we are doing. In a bricks and mortar environment, this would be equivalent to informal checkins through the day or the kind of personalised conversations we have when we confer with students individually and in small groups.

By scheduling regular check-ins with our students, we gather data that can inform plans for ‘where to next’ for their learning.

Check out this great resource  (.PDF) compiled from the audience of “Inquiry by the Fire” with Kimberly Mitchell, Trevor Mackenzie and Kath Murdoch.

Ever wish you had a quick way to find the last page you visited in Canvas? Now you can! Check out the new Recent History link/button in your Global Navigation menu. 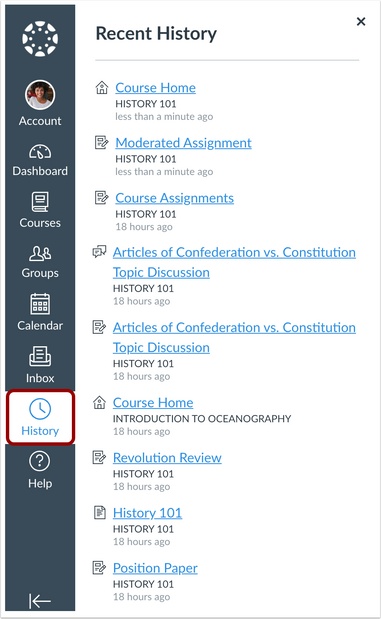 Sign up to receive our newsletters—no more than one or two per term, pinkie swear!

We promise we will never SPAM you with unwanted emails. We respect your privacy and will never share your email address with any person or organization.

How do I remove myself?